"My journey to camp" by Arianna Ware

So, after years of waiting to finally apply for the Camp America programme, June 2015 came around quicker than I expected.

So, after years of waiting to finally apply for the Camp America programme, June 2015 came around quicker than I expected and it was time for me to begin my journey to camp.

The clock strikes 3am, and my alarm chimes; time for me to get myself up and ready to head to London Heathrow. After last minute checks, and a brief goodbye to the dog (anything longer than 30 seconds would’ve set me off, so I kept it short and sweet), it was time to leave the house and set off on the first travels of the day. Of course, it’s so early in the morning, everyones tired, but the atmosphere in the car on the way to the airport was weird; everyone wanted to get some sleep to make the 3 hour journey go that little bit faster (or slower in some instincts), but the excitement and nerves were taking over, for everyone – particularly me! I remember taking charge of DJ’ing the car via my phone, playing the likes of Whitney Houston – my all time favourite, to try and take everyones mind off the fact that this journey will be taking me to the start of my big adventure!

Anyway, 3 hours later, and the monumental figures of aircrafts were visible from the window, and the sign ‘Welcome to Heathrow’ become clear…this was it, we finally arrived. Pulling into a car parking space, it was time for me to take a deep breath, step out of the car, and grab my luggage. Trying to get the hang of wheeling two suitcases, whilst trudging along with a bag on my back, was proving difficult…every family member insisted on helping me out with my baggage but I refused, because hey, if I can’t manage it from the car to airport check-in, how on earth would I manage it all by myself on the other side? Maybe I should’ve packed lighter…but that’s another story!

Heathrow airport, the place where hundreds of emotions are rolled into one…excited for my next adventure but nervous for it at the same time; sad that this is where I have to say my goodbyes to my loved ones, yet happy to see what my adventure brings; stressed at the atmosphere an airport brings, yet confident that I could tackle everything independently. I was feeling every single emotional possible, but the excitement was definitely taking over…for now!

It’s true when they say you are never really alone with Camp America. I don’t think i’ve ever seen so many Camp America T-Shirts in one place at one time before, it’s amazing…although,it’s not when you’re trying to look for the people on the same camp as you, when all you’ve ever seen of them before is a profile picture on Facebook – it’s like real life Where’s Wally!!

After numerous failed attempts of finding the girls on my camp, I finally found one before boarding security. After a gruelling 30 minute wait with our families outside security, seeing other applicants take their first steps through security, whilst leaving their loved ones crying into one anothers shoulders, it was time for Charlotte and I to do the same. I’m an emotional person anyway, regarding the environment I was in at the time, but I’m not going to lie, airport goodbyes are tough. If it wasn’t for the excitement of what was coming next and how long I’d waited for this, I don’t think I could’ve done it. But, within 5 minutes, the excitement flooded back, and I was sat in departures with a group of Camp America applicants, waiting for that all important boarding call. Waiting for the call was the perfect opportunity to get to know the girls on my camp, along with a bunch of other excited applicants, it was strange to see some of them get up and go, would I ever see these people again? 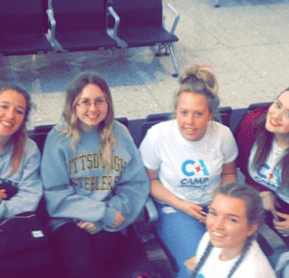 ‘Now boarding’ finally appeared on the electronic screens, so it was time for us to make our way to the gate and get on board the United Airlines flight to Newark International Airport. The moment I sat in my seat, looking out the window at London Heathrow, was the only moment I actually thought “oh dear,  what am I doing?”. A rush of nerves overcome me, so I put my earphones in, stuck on some music, and responded to an overwhelming amount of good luck and goodbye messages from my friends and family on my phone (this probably wasn’t the best thing to do), then before I knew it, the crew announcement echoed the plane, and we were on the runway ready for takeoff…this was it. 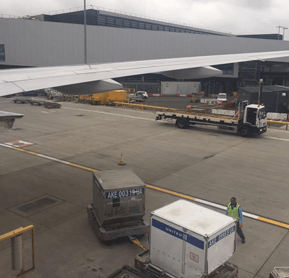 3 movies later, along with what felt like just 30 minutes sleep all in an 8 hour journey, we finally touched down into Newark International airport. It was time to get off the plane, go through customs and border protection, grab our luggage, go through security, and get to the gate for our last flight directly to Cleveland International airport, all within the space of just 3 hours…would we make it? If our plane wasn’t delayed, we definitely would’ve missed this connecting flight, everything seemed to be going wrong; we had a 2 hour wait at customs, a lost bag, a beeping machine at security, and a mad rush through what seemed to be like Black Friday shoppers x10, all to then find the gate had changed and we had to embrace the swarm of people yet again, still running despite the fact the clock had already hit the time of departure for flight 2. However, to our belief, despite being 10 minutes late at the gate, the plane was delayed, and we arrived just in time to start boarding – phew!

This was the last leg of my journey to Ohio, and it was just a short 2 hour flight. With no inflight entertainment, yet again, I found myself listening to my music through my earphones, this time, admiring the views of New York City from the window upon take-off. 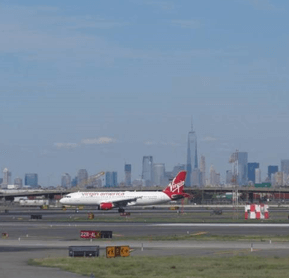 The flight went super quick, it felt like when I sat down, it was time to stand back up and disembark the aircraft. Walking through Cleveland airport knowing this was our final stop was very exciting, but the excitement definitely kicked in when we spotted someone holding a creatively designed ‘Welcome’; this is when it hit me… this was real!! 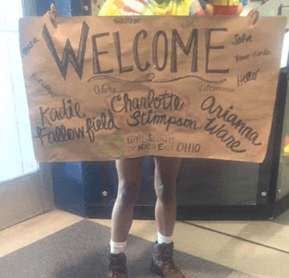 This was the beginning of my American adventure; the humidity hit me as soon as I stepped one foot onto the outside ground, I remembered this feeling from previous holidays to the US, but it still shocks me. After playing a physical game of Tetris; trying to squeeze all our luggage into a car that seemed the size of Mr Beans three wheeler, it was time to get moving, and we headed straight to Walmart and Steak and Shake…what’s more ‘American’ than a trip to Walmart and a meal at Steak and Shake before your arrival to camp?! An entry to the US definitely well spent! This was also the start of some clearly amazing friendships. Curly, the lovely lady who picked us up, was the Waterfront Director at camp, and after just a 30 minute car ride with her, I knew we’d get on really well this Summer!! I had a Nutella milkshake in Steak and Shake…and this was the beginning of what soon become my camp name; Nutella. 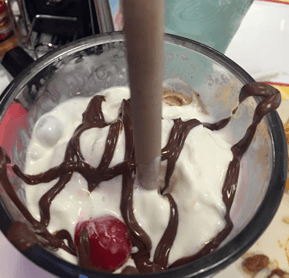 After being treated to a delicious meal from our camp director, we headed straight to camp. Looking out of the window, admiring the views, being in complete awe that I was finally here – in the distance, I seen the ‘Camp Wedgwood’ sign, and butterflies filled my stomach…in seconds we’d pull into what was going to be my home for the next 2 months! 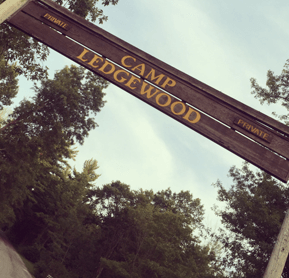 Pulling into Camp, and getting out of the car was a feeling i’d never forget, and a moment i’ll treasure forever. There waiting for us, was our lovely Camp Director, Sassy, who we had all met at the recruitment fair back in January, along with a whole team of lovely ladies, who were the Unit leaders for Camp. Sassy ran up to us, gave us each a hug, and introduced us to the team of unit leaders; I couldn’t have been happier…within just 2 minutes of arriving at camp, everybody was so welcoming and happy, I instantly felt at home.

Despite having been awake for almost 24 hours, we were given the option to get some sleep ready for the start of staff training the next day, but that is not something I wanted to do, I was so happy, I just really wanted to get stuck straight in and get involved with camp preparations with the staff!! This sure was going to be a summer to remember…I just knew it!

What happened next? Read my upcoming blog to find out all about life at camp!

Despite how long, stressful (or un-stressful) your journey to camp may be…trust me when I say it’ll all be worth it in the end. As you’ve probably identified from this ‘blog’ (I apologise it’s so long), you start creating memories and friendships the moment you get into the airport and each journey is an adventure.