Hi guys, sorry for not blogging in so long but life just took over. However, I am over the moon right now because on the 23rd of January I was placed for Camp America at their London recruitment fair...

Hi guys, sorry for not blogging in so long but life just took over. However, I am over the moon right now because on the 23rd of January I was placed for Camp America at their London recruitment fair. It wasn't actually their 'open for everyone' recruitment fair but it was an invite-only Christian camp one which took place before it where fewer camps attended and also fewer participants- so the placement chance was very high.

I had to get the train to London at 06:15, and then started queuing at the venue for 08:30 as the event started at 09:30. The people who work for Camp America are so helpful, they answered any questions that we had in the queue and gave us advice to try and calm our nerves. Then they whisked us into the fair which was a small-ish room full of tables with camp directors sitting on one side and a chair on the other side for the participant. When I walked in I quickly scanned the room to look for the camp that I had been researching, and there they were with an empty chair like it was fate.

I walked over and shook hands with the camp director, and then was also introduced to the other two people on the panel. He asked me to tell them a little about myself, which I did, and then he asked to see the questionnaire which everyone had to answer prior to the recruitment fair about their faith, and how you think you could use it to invest in the lives of children at camp. As he read through my questionnaire I talked to a boy on the panel who was a lifeguard at camp and asked him some questions. Then the camp director asked me if I was available on the particular dates, and after a couple more questions started to fill out the placement form, I was literally bursting with happiness on the inside but trying to keep it together on the outside. I couldn't believe it 15 minutes into the recruitment fair (and alike to a lot of other people) I was hired!
So now for the important bit, I am going to be working as a cabin counsellor at The Salvation Army Eagle Crest Camp for underprivileged and Christian children in Illinois, and I am so excited! I feel like summer camps are such a traditional thing in America and now actually getting to be a part of one feels amazing. Also, to provide you with some geographical information, Illinois is the state home to Chicago which makes me feel incredibly lucky to be going there as it is somewhere that I have always wanted to visit.
As for any advice about attending a Camp America recruitment fair, I would tell you not to worry if you are nervous because the Camp Directors DO take this into account, I mean of course you are going to be nervous you're being interviewed for the job of a lifetime. Also, just be yourself and have confidence in your abilities because the Camp Directors want you to do well and they want to hire you, I mean lets be honest they have taken time out of their lives to fly all the way to England, this is important to them. Lastly, don't be disheartened if you get turned down at first, I know that I got my first choice at the recruitment fair, however, a couple of weeks before this I had a skype interview which I wasn't successful in and instead of letting it knock my confidence I just saw it as interview practise, and they obviously didn't think that I was right for their camp and I respect that decision. 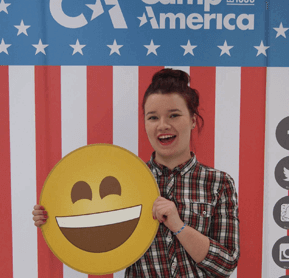 Anyway, that's all for now but if you want any advice about applying for Camp America just let me know because I feel like this is going to be a summer experience of a lifetime! Also, if you've taken part/ are currently taking part in Camp America then say hi because I would love to chat to you about it, and as for Camp America, thank you so much for providing me with this opportunity.