I’m with you on the packing situation. So, since October last year, I have been set on taking a backpack, after a few trials it seemed fine....

NB: For details re these posts, please see post: The Idea

I’m with you on the packing situation. So, since October last year, I have been set on taking a backpack, after a few trials it seemed fine. But after a few more, in the final days before traveling, I came to the realisation that if I go ahead and take the backpack, I’m likely to get a dislocated shoulder when I attempt to get the backpack of the carousel.

So on the 18th June, the night before I flew, I got my suitcase out the loft and packed everything into it, minus the English tea and English chocolate, because I’m not a fan of either, I know. Apologies in advance.  Overall, I guess I’m not into the whole packing situation either, so I agree with you on that.

On the 19th June, the day I flew out, well I couldn’t have planned for a more distruptive travel day, on the English soil side of things.

So my family dropped me of at Manchester Airport around 4am. Bearing in mind they’d be heading back later that day for a flight to Tenerife and we’d all had no sleep. But it was all good. We said our emotional goodbyes and off through security I went to catch the first flight of the day to London, Heathrow, continuing to catch every last glimpse of my parents as I walked through. 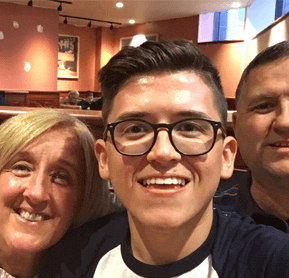 In the departures lounge, I met a couple of people on my flight doing Camp America, which was awesome. They were catching a later flight from Heathrow. 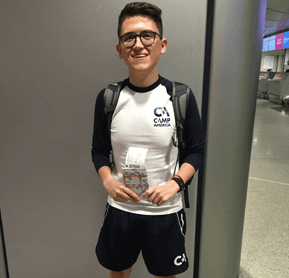 When we boarded the plane, which I have to say was quick, what happens? we get delayed. For a while, I had been thinking of this and hoping it wouldn’t happen, because lucky enough, I’ve not really been affected by delays before. Today was my day though.

First we got told it was because they didn’t know the weight of the plane and then because they weren’t sure of how many passengers were onboard due to a technical fault. After just over an hour of sitting on the tarmack, we took off to London. During this time I got chatting to a lovely lady, Alex, who works in the IT industry, her job allows her to travel. So awesome. She too was catching a flight from London, over to Chicago, then to Cinncanati. We chatted all things travel and overall, she was a great inspiration and defiantley made the delay much more interesting, so thanks Alex, it was lovely to meet you.

Arriving at London, Heathrow connections, I said goodbye to Alex. It’s awesome how you can get to know someone so well within such a short time of meeting them.  She even took this awesome picture below for me. 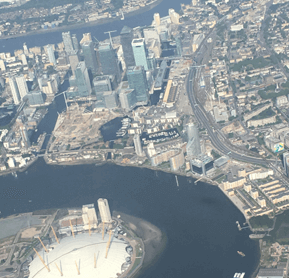 At Heathrow, I thought I would have time to grab food before my next flight because initially I was meant to have 1:40 between flights. Did that happen? Nope.

After chatting with Alex about upgrades, I  asked customer services at Heathrow whether there was any upgrades available for my flight to New York because there was around 25 minutes left until boarding. The agents answer was ‘I needed to immediately go to my gate’  which involved getting an air train and running up two high flights of escalators. Rushed was an understatement.

After getting to the gate, the flight was boarding. I met another Camp America participant, had a quick chat, and then we went onto board the plane.

On the plane, I got a window seat, after someone asked to switch with me. There was a spare seat in between me and a fellow traveler that day which meant more leg room for me, yay! And nope, I didn’t get that upgrade for those wondering. The regular drink and food service was good though. 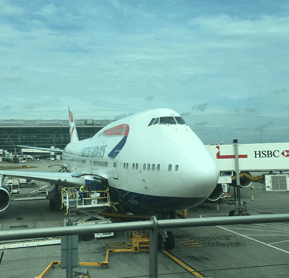 Like you Arianna, since I got placed at my new camp last October, I haven’t had much nerves, just excitement. So when I got onto the plane to head to New York, I was beaming with excitement, just like you.

But then what happens? another delay. All for the same reasons as Manchester. Sat on the tarmack for over an hour. I had too much time at this point to think alone and I guess I can say my mind hit a sudden state of  a mix of emotions. Similar to what happened to you when you arrived at camp.

The passenger next to me going to New York couldn’t have been more different to Alex if they’d tried. On a plane, people either want to chat or they don’t, I’m the chatty person, this guy wasn’t. I’m referring to him as the ‘guy’ because I didn’t even get his name. The one sentence he spoke to me was ‘you’re in my seat’ because originally, I was the first to sit down on the row and had sat on the end, thinking someone would get in the middle so I thought it’d be easier to let them in, but as mentioned, no one was sitting there.

Eventually in the skies for the second time that day, which by this point I had been up over 24 hours, I tried to sleep but found it impossible. I instead watched 10 Cloverfield. If anyone has seen it, I’d love an explanation about what it’s about because I couldn’t grasp the concept. The rest of the journey, I ate, force attempted myself to sleep numerous times to no avail, and stirred out the window into the beautiful clouds, listening to my music.

My plans to arrive into New York for 12:10pm wasn’t happening. I looked at my watch the whole way, just thinking about how I may miss my ride to camp. Lucky enough that didn’t happen.

I landed in JFK, a beautiful sunny day, and once on the runway, taxiing to the terminal, I caught a quick glimpse of the skyline of New York. I couldn’t believe I was back. It’s so surreal seeing the skyline, it’s amazing and unreal. Photo doesn’t do it justice. 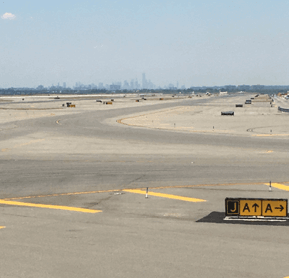 I did manage to get a network connection on my phone when I landed and texted the staff picking me up to let them know of the delay, which by the time we landed, it was about 12:40. So not so bad and they were waiting on others too, so I wasn’t the only one against time.

But then what happens? The tunnel to get of the plane, I forget the actual term, happened to be broken and we had to sit and wait for them to fix it. Only for about 15 minutes, but it felt like an hour after the amount of delays I had already had that day. And I was at the back of the plane and they only opened the front of the plane.

Finally into JFK customs, the que was long. But not as bad as I was expecting. Once I got through, my bag was right there on the carousel. Bag picked up, through immigration and off to the taxi pick up.

Holla’d a yellow cab and off I went, well so I thought. I couldn’t believe what happened next. 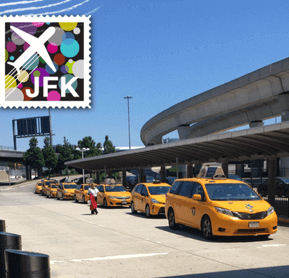 The taxi driver dropped me off at the wrong hotel….

By this point I had definitely passed the annoyed point. I was quite relaxed, oddly enough.

While waiting for another ride to get me to the right hotel, a Camp America participant gets off a hotel shuttle bus and introduces himself as Aiden. It only turned out he was going to the same as camp as me and also got taken to the wrong hotel!! What are the odds of that?

Okay. So think of it what you will. But it was like it was meant to be. All the delays suddenly became a distant memory for me.

We then met up with everyone else who had arrived the night before and also that day, and off to camp we went, with our awesome chauffeur Anthony. 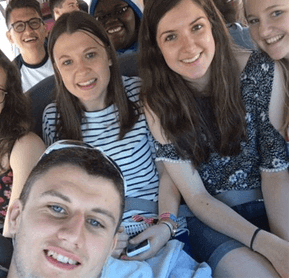 Arianna, I’m totally with you on the sleep deprivation. After I got to camp, we had dinner, had a trip to Walmart, which is always exciting, then by bed time I had been up a near 48 hours. I had passed the tiredness point by this point and was worried I would never sleep again. Or I would just fall over. But I managed to sleep a bit that night. Camp has memory foam mattresses!! Perfect.

And now, fast forward, it’s two weeks later, and just like you Arianna, my timing for the blogging hasn’t gone to plan, but like you, sleep and self care at camp comes first. The precious time you get at camp, is gold. And you can’t rely on pre plans when at camp. Schedules always change and my training schedule was jammed packed!

I’ve just completed two weeks of high intensity training, which has been amazing, tiring and also difficult at some points, but I wouldn’t change it. I’ve learned so so much already in just two weeks and met an amazing group of people, who are now like family.

I’m also officially qualified as an American Red Cross Lifeguard, also certified in CPR and First Aid and I’m really proud of this achievement! The course was intense, but with the support of my co-counselors, I got through it.

Amongst that, we’ve been trained in all other areas, from camp activities, safeguarding procedures, Christian formation, setting up camp and overall awesomeness.

Two weeks on, I can only say that I’m really happy here. The happiest I have been in such a long time. It speaks for itself. 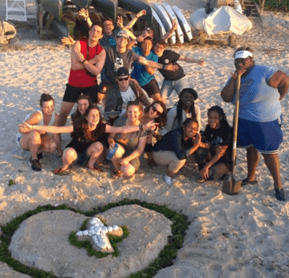 Yesterday, we moved out of our staff training bunks, cleaned around camp and moved into our bunks for the summer, ready for the first session of camp to begin this Sunday, with explorer camp.

Over the summer I’m going to be teaching paddle boarding and assisting in running evening and weekend programmes, which is exciting and also challenging, but with everything, I will put 110% into it.

To finish staff training yesterday, we had an awesome awards ceremony and eucharist. It was so awesome to recognise everyone’s hard work these past two weeks.

Last night, we all left camp until Sunday morning. I’m spending two nights in Smithtown, Long Island. An awesome new friend Andrew, and his awesome family, are hosting us. 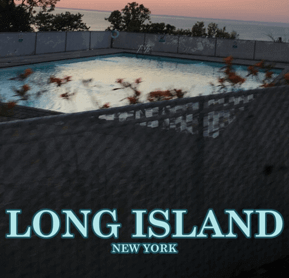 The past two weeks have been incredible and so surreal.

The camp is amazing. The people are amazing. And I’m so excited to see how the rest of summer goes and to meet the first bunch of campers this Sunday. 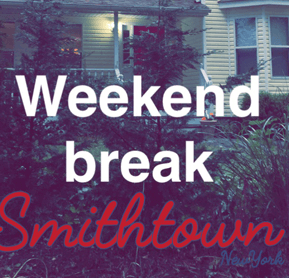 This is my home for the summer. I feel truly blessed.

Arianna, friends and family, I’ll try to blog again soon, probably not accordingly to the planned schedule, but as and when I get time.

I hope you’re having an awesome summer Arianna, I look forward to reading all about your first week with the campers!