Having worked as a Camp America Brand Manager for the past seven months or so, I’ve attended quite a few CA related events...

Including the awesome recruitment fairs, which in return I’ve had the chance to meet a whole bunch of awesome like-a-minded people.

One person who has since become a very good friend of mine from the London recruitment fair back in February, is Arianna, a welsh travel go-er, blogger, Twitterer and CA enthusiast. 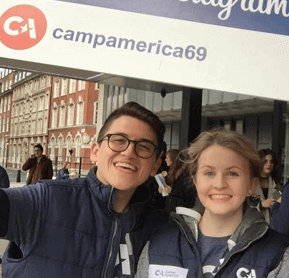 Arianna is off to America for her second summer in June, working as a general counselor at Camp Ledgewood, a Girls Scout camp in Ohio.

Because of our similar interests, we decided we should team up this summer, creating a blog project which allows us to share our experiences, both at camp and when we travel afterwards, allowing an insight for future Camp America participants to contrast our experiences, as both of our camps are completely different, with myself going to a private Christian camp, Camp Dewolfe, in Long Island, NY.

NB: I also took part in Camp America in 2014, working at a Special Needs camp. To read about my experience please click here

The goal of this project is to allow future applicants to gain an insight into our experience, and it’s a chance for friends and family to have a read too about what we’re getting up too, and something for us both to look back on when we return home in September.

The project acts a ‘Dear Diary’ set-up, with my posts being addressed as Dear Arianna and vice versa. Our blog posts will alternate each week, allowing myself and Arianna to share our happenings across a two weekly basis, whilst answering any questions we may fire at each other.

The schedule is as follows, but don’t take this as solid grounding, there may be a power cut and one of us is unable to post! (p.s I hope this doesn’t happen)

NB: More blog posts will be published by Arianna at the beginning, as Arianna heads out to camp earlier and nearing the end of the blogs, you’ll find more posts from me as I head home later than Arianna.

You can also keep up-to-date with us both on our social media channels: