Film and TV locations in America, You Should Visit This Summer.

Love movies? Love TV shows? Well here are some real life filming locations that you can visit in America! 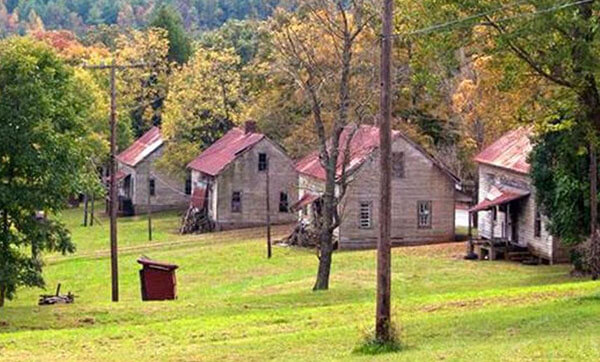 District 12 can be found in the abandoned textiles town of Henry River Mill village, in Burke County, North Carolina. Some of the Tribute Training Centre shots, was filmed at the Marriot Marquis, in Atlanta Georgia, (265 Peachtree Center Ave NE, Atlanta, GA 30303, USA) Some of the Arena shots was filmed at beautiful DuPont State Forest - at Triple Falls you can find where Katniss finds Peeta, camouflaged against the rocks. 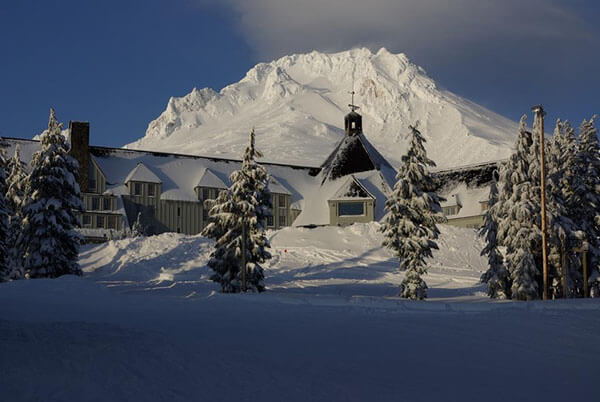 Overlook Hotel in all its creepy glory was mainly filmed in a studio in London, but the Timberline Lodge, in Mt. Hood, Oregon, is where they filmed some of the exterior and aerial shots. You can actually still stay in this hotel!

3.Sex and the City 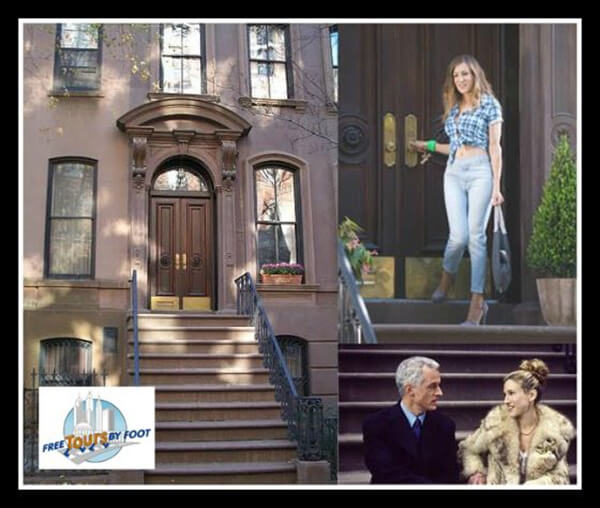 Carrie’s apartment is almost as famous as the cast themselves in the show! Head to 66 Perry Street in the West Village to get a picture of the steps Carrie used to walk up every day! You can also head to the New York Public Library, which is in the Sex and the City Movie. 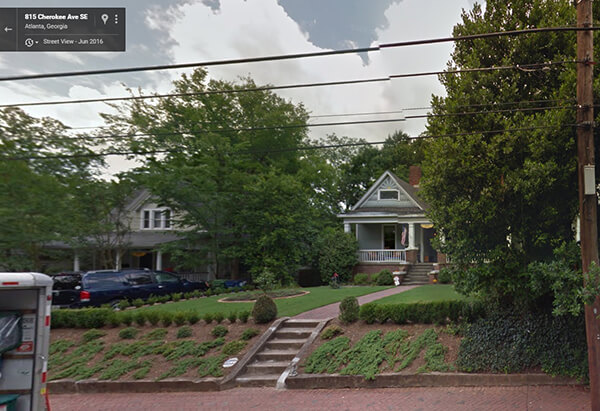 Pay a visit to Rick’s House, on 817 Cherokee Avenue, Atlanta. or Belwood Quarry is used for a few filming locations and was used as the campsite in The Walking Dead, near Atlanta. You can also go and see the CDC in Atlanta; the building they blew up in the show can be found at: 2800 Cobb Galleria Parkway.

Film your own montage of boxing at the Rocky Steps, which is the entrance to the Philidelphia Museum of Art. 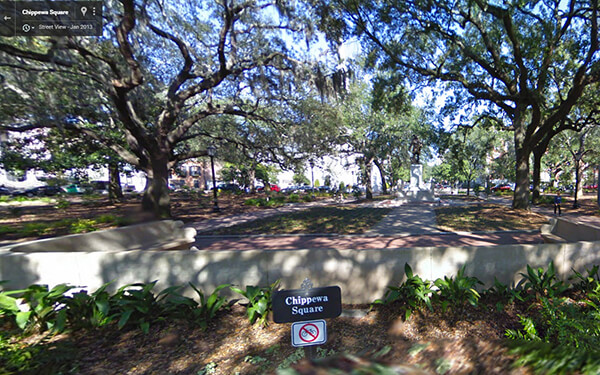 There are quite a few spots around the states for Forest Gump! Head to Monument Valley, or the Lighthouse in Maine at Marshall Point, or even visit Chippewa Square, the famous bench where Forest Gump has one of the best quotes in any movie, in Savannah, Georgia 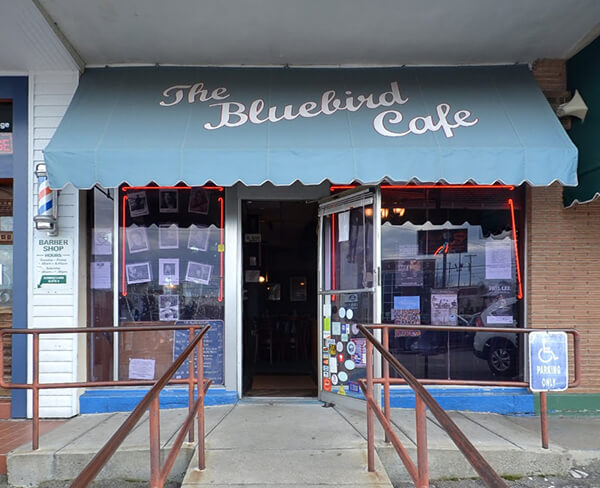 Nashville fans trip to the US wouldn’t be complete without a stop off at Nashville, you can visit the Bluebird Café and listen to some live music! Make sure you try and get there early because it gets incredibly busy! 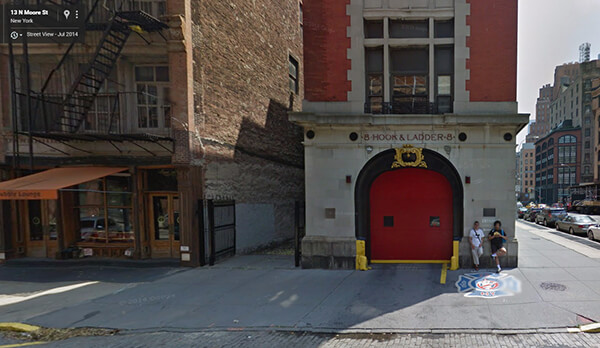 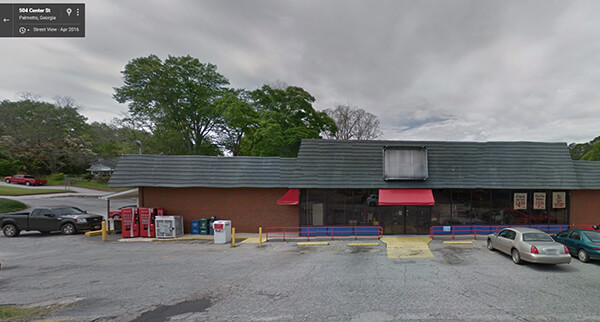 There are a bunch of places to visit to get your Stranger Things fix! You can stop by Hawkins Laboratory which is actually Emory University Briarcliff Campus, in Atlanta. Or visit the Bellwood Quarry, Atlanta, which features in the TV show when they are looking for Will. Downtown Hawkins is a town called Jackson, in Georgia. You can visit the store where El goes shopping for Eggos (504 Center st, Palmetto) The library, the school, and the restaurant are all in downtown Jackson. 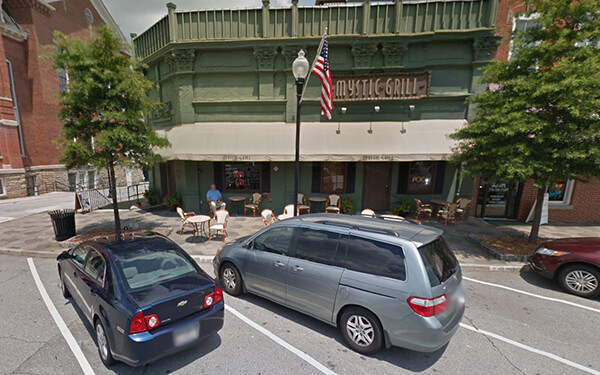 Mystic Falls is a real place in Covington, Georgia. You can visit the Mystic Grill, the Clock tower, the Lockwood Mansion and the Gilbert House. You can even get tours from Vampire Stalkers Tour for $55. 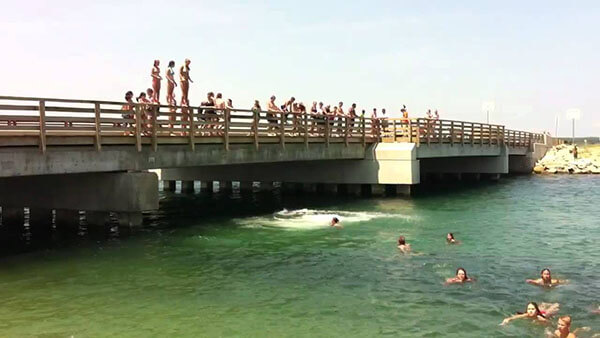 Edgartown on a small island in Massachusetts called Martha’s Vineyard is where Jaws producers filmed the famous movie, and called the town Amity! 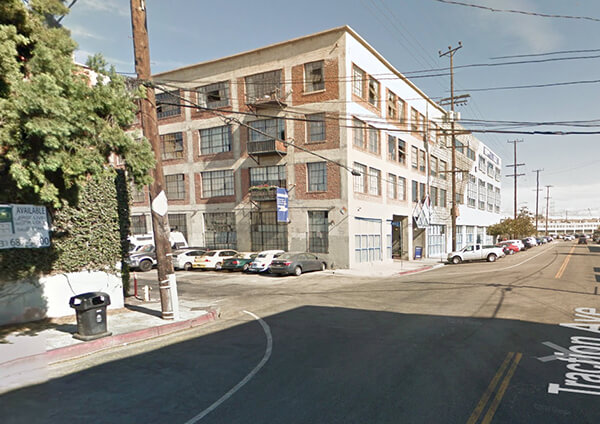 Visit the location of the loft, where Jess and her roommates lived: 837 Traction Avenue in LA, in the Artists District, this area is the site of an average of 900 movie shoots per year apparently! You can also visit Nick’s Bar, which is actually called The Prince and is at 3198w 7th Street, LA. 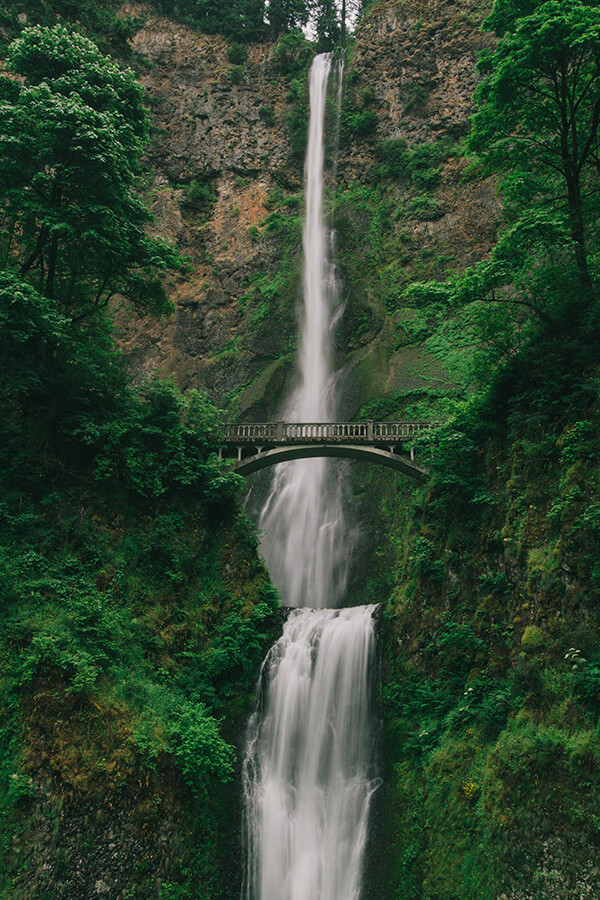 You can visit Kalama High, which is where they filmed exterior shots of Twilight’s Fork’s High School. 548 China Garden Rd, Kalama, in Washington. Or head to the beautiful Multnomah Falls, in Oregon, which was used for one of the scenes with Edward and Bella.

14.How I met Your Mother 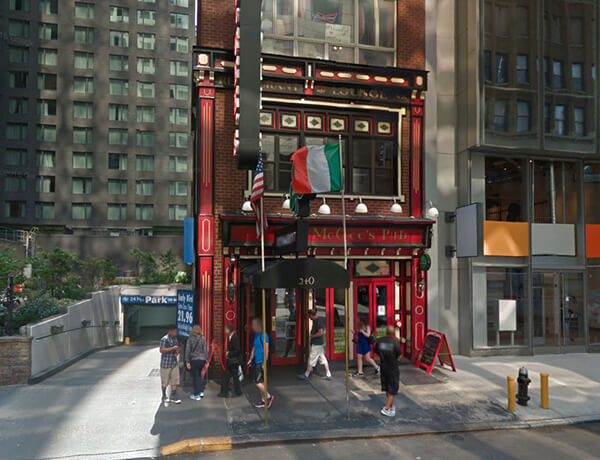 The most famous spot in the show, is McClarens Bar where the group of friends continuously hang out, which in real-life is called McGees in New York. (240 West 55th Street) They even hold How I met Your Mother trivia nights every Tuesday at 8pm. http://mcgeespubny.com/ 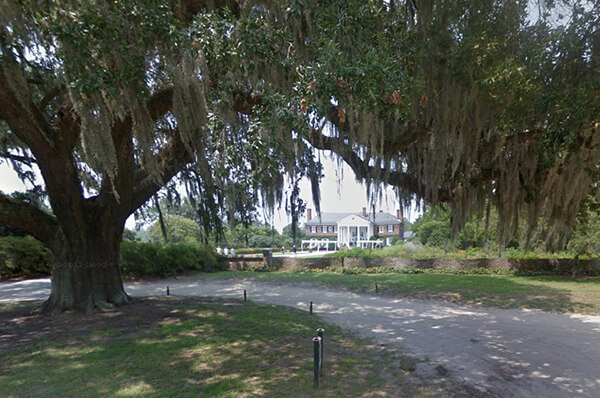 Visit the old village in Mount Pleasant just east of Charleston, which was used as the film’s town of Seabrook in South Carolina. Or stop by the Boone Hall Plantation, which was used as the Hamilton’s summer house, also in Mount Pleasant. Or head to Cypress Gardens, the lake where they go out on the boat, surrounded by swans! The lake can be found in Berkeley County in South Carolina. 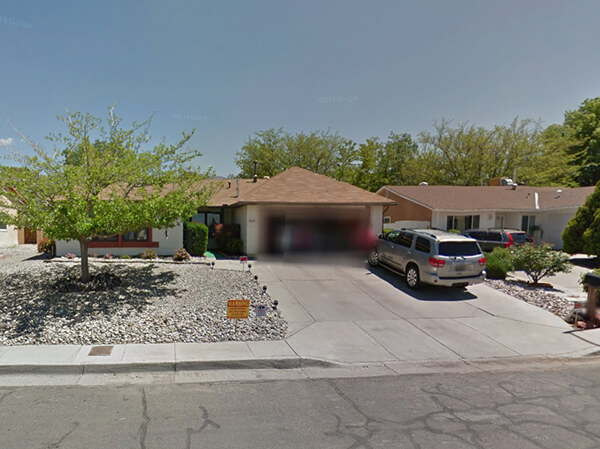 Why not get yourself over to Walter White’s house in Albuquerque in New Mexico! 3828 Piermont Drive. Or visit Twisters the home of the shows ‘Los Pollos Hermanos’ at 4257 Isleta Blvd also in Albuquerque, they even have a mural on the wall! 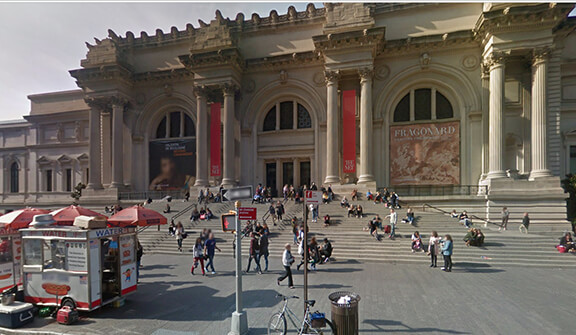 The famous scene of Serena returning to New York was filmed at Grand Central Terminal – 89 E 42nd street, NYC, and has been used for many other films and tv shows. You can also pay a visit to the New York Palace Hotel, which is where the Van der Woodson’s called home: 455 Madison Avenue. Or visit the spot where Blair and her minions ate lunch on the steps of the Metropolitan Museum of Art – 1000 5th Avenue at 82nd Street. If you want to see the entrance of the Constance Billiard School, it is at the Museum of the City of New York: 1220 Fifth Avenue, 103rd Street. 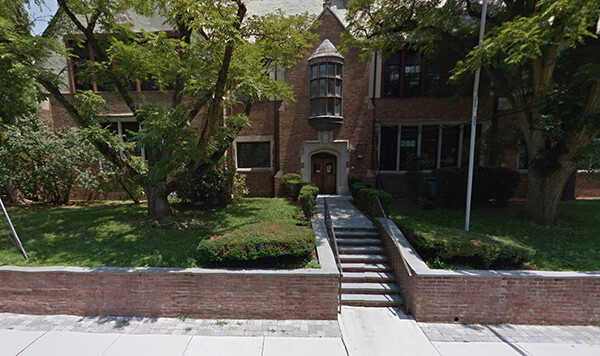 The school that Bradley Cooper’s character works at, is the Daniel Webster School in Pasadena, 2101 E Washington Blvd, Pasadena, CA 91104. Ceaser’s Palace in Vegas is the spot where the squad from the Hangover throw a legendary bachelor party for Doug. 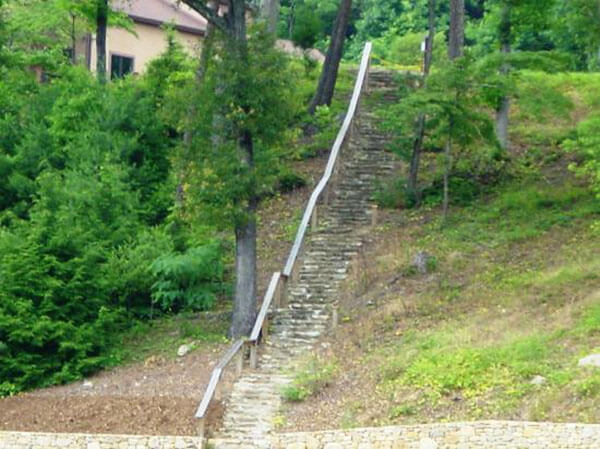 Head to Mountain Lake Lodge in Pembroke, Virginia, which played home to the Kellerman’s exterior and some interior shots. The resort even has themed weekends for Dirty Dancing fans! You can stay in the Virginia Cottage where Baby and her family stayed and get a picture in the gazebo! Or head to Lake Lure in North Carolina, where a boy’s summer camp was used as a filming location and the gym was where the famous Baby and Johnny routine was performed. You can still visit the steps where Baby practised her dance moves!

Check out the building where DiCaprio has his first job at 120 Broadway, Manhatten, New York. Or head to the Brookville Country Club, which is called, in real-life, the Willow Ridge Golf Club, 123 North Street, Harrison, New York. 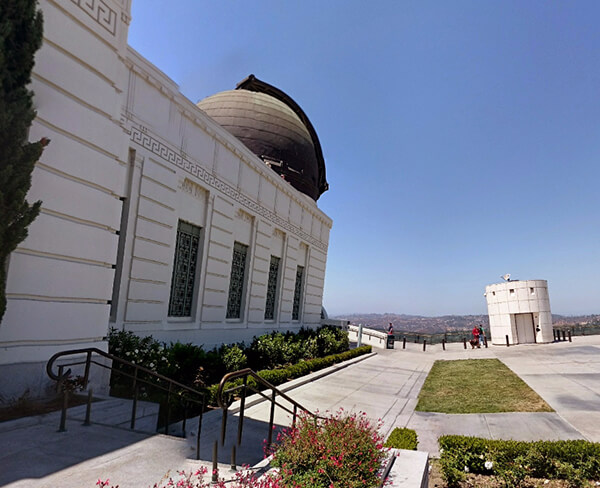 Head to the Griffith Observatory in Los Angles where Ryan Gosling and Emma Stone danced around inside! 2800 East Observatory Rd. Los Angeles, CA 90027. They ended up re-creating the observatory on a set as filming is not permitted inside, but they still used the exterior. Head to the Hermosa Beach Jazz club also in Los Angeles, where Gosling takes Stone, when she says she doesn’t like jazz. 20 Pier Avenue, Hermosa Beach, CA 90254. 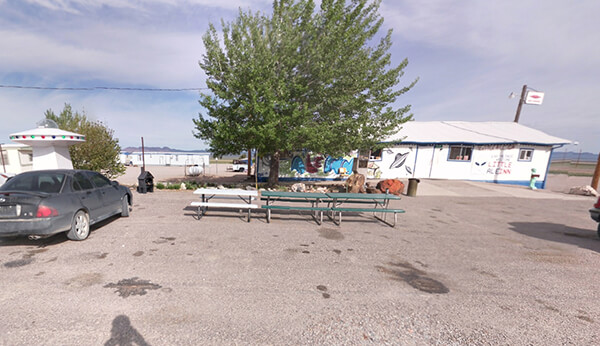 Most of the places Pegg and Frost visit in the film are real places in Nevada. You can drive by Area 51 but can’t get very close. You can stop by the Little A’Le’Inn restaurant, bar and motel at 1 Old Mill Rd, Alamo, Nevada. Visit the black Mailbox, or the alien dropbox in the film, which is the only landmark for 40 miles of highway HC 61, Box 80. P.S. Make sure you check out the address for the A’Le’Inn restaurant on Google Maps, where they’ve replaced the street view man with a UFO! (It’s the little things) 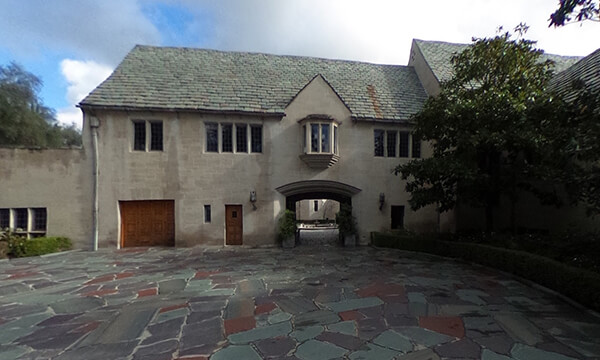 Stop by Chilton High School, which you can find in Beverly Hills, the real location is Greystone Mansion on 905 Loma Vista Drive. Pay a visit to The Ebell Club, which was used as Rory’s school cafeteria and where Richard and Emily renew their vows. Alongside Gilmore Girls many a movie has been filmed here from Wedding Crashers to Benjamin Button, they have also had Kelly Clarkson and Selena Gomez film music videos here! If you want to see Stars Hollow itself though, you should head to Warner Bros. in Hollywood to get on set as the town is completely fictional! 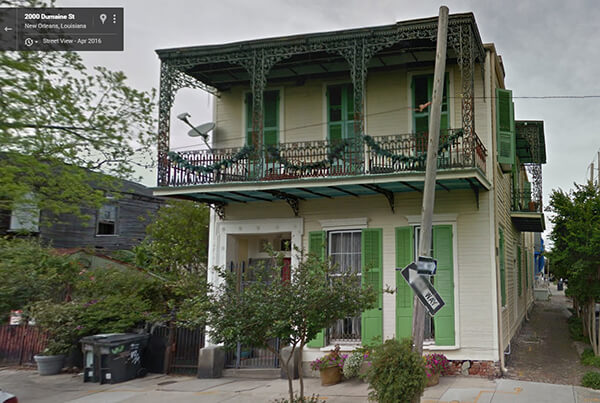 You can visit the ‘Murder House’ in season 1 of American Horror Story, in a leafy suburban area of Los Angeles. The terrifying house is called the Alfred Rosenheim Mansion and you could at one point, even book it for an Airbnb! The house has also been featured in Dexter, Buffy the Vampire Slayer and the X-Files. Or head South to Louisiana where you can find Miss Robichaux’s Academy for Exceptional Young Ladies, from season 3, at 1410 Jackson Avenue, New Orleans, LA 70130.  Also in New Orlean’s is Mary Laveau’s Cornrow City Salon, 2000 Dumaine Street, New Orleans, LA 70116. 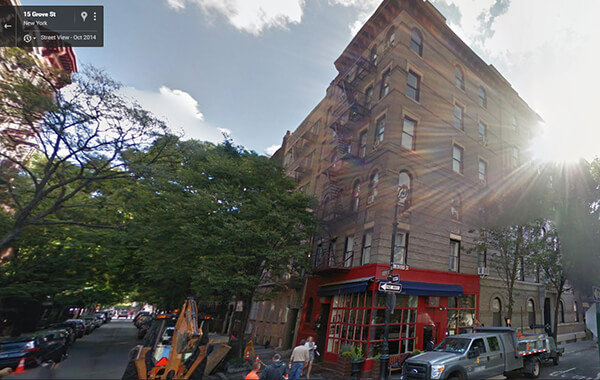 The Friends apartment building can be found in New York at the corner of Grove Street and Bedford Street in the West Village. Central Perk is known in real-life as ‘The Little Owl’ but looks nothing like Central Perk inside, but you can see a replica on the Warner Bros. Studio tour.